“Misty” is a 4 year old F/S English Setter who presented to her veterinarian for inappetence and weight loss. She had lost 6 lbs in the course of 3 weeks. She had an occasional dry cough but no other specific clinical signs were reported. The working diagnosis based on a brief ultrasound exam by the referring veterinarian was stump pyometra. 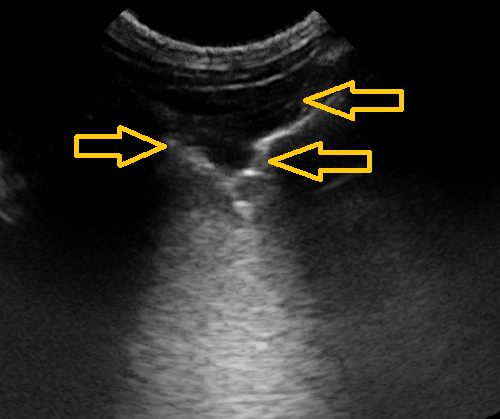 Fig. 1: Shred sign seen with focal lung consolidation. The hallmark of a shred sign are hyperechoic foci (difficult to see on this image) representing air bronchograms within the lung consolidation. In this case, the shred sign is due to fungal pneumonia, but it may be seen with other alveolar diseases including most commonly bacterial pneumonia, but also pulmonary hemorrhage or severe pulmonary edema. Note there is a nodule sign with its pseudo B-line along the far border of the shred sign. 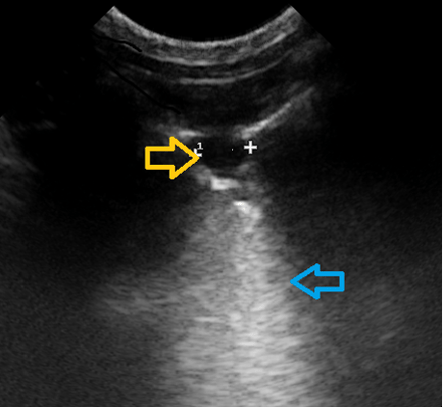 Fig. 4: Nodule sign. The line drawings correlate with the ultrasound image showing the nodule sign.. The nodule sign is characterized by a hypoechoic to anechoic circular or oval shaped structure that also has a pseudo B-line extending from its far border through the far field. Note the psuedo B-line extending from the nodule through the far field. These images are used with permission from Dr. Greg Lisciandro, DVM, DABVP, DACVECC, Hill Country Veterinary Specialist, and Point-of-care Ultrasound Techniques for the Small Animal Practitioner, 2nd Edition, Wiley-Blackwell ©2021. 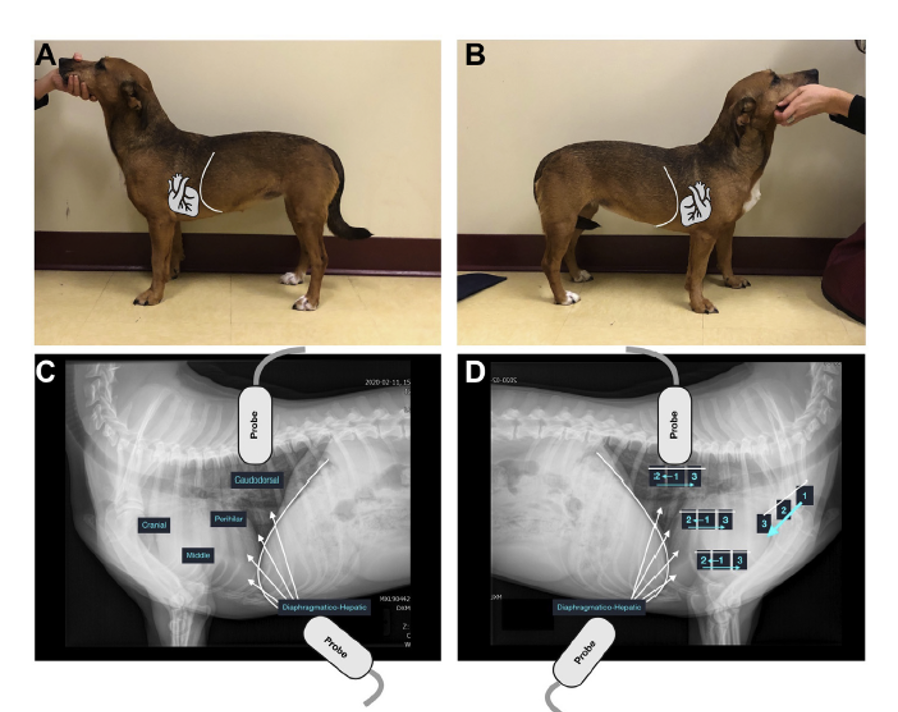 Fig. 5: The Vet BLUE® Lung Ultrasound Examination. The overlays on the standing dog correlate with the same dog's standing radiographs. The Vet BLUE® is a regional, pattern-based approach to lung ultrasound with a caudal dorsal, perihilar, middle, and cranial lung regions applied bilaterally. The diaphragmatico-hepatic view serves as a deep view along he pulmonary-diaphragmatic interface inaccessible from transthoracic views. A minimum of three intercostal spaces are interrogated at each of these regional views that are interpreted with a pattern-based approach. These images are used with permission from Dr. Greg Lisciandro, DVM, DABVP, DACVECC, Hill Country Veterinary Specialist, Vet Clin North America Small Anim Pract 2021;51(6);1125-1140. 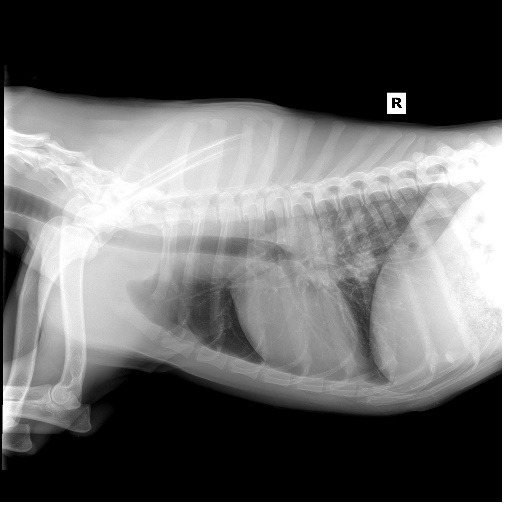 Given the dog’s age and travel history, fungal disease was considered most likely; however, neoplasia and verminous pneumonia could not be entirely ruled out. Thoracic radiographs were subsequently performed and showed hilar lymphadenopathy and patchy interstitial pattern (non-definitive). Based on these findings, fungal titers were submitted and diagnostic for Coccidioidomycosis. Itraconazole was started within 48 hours. Moreover, Vet BLUE® can be used for monitoring clinical course on recheck examinations as a primary imaging modality once the diagnosis is made. 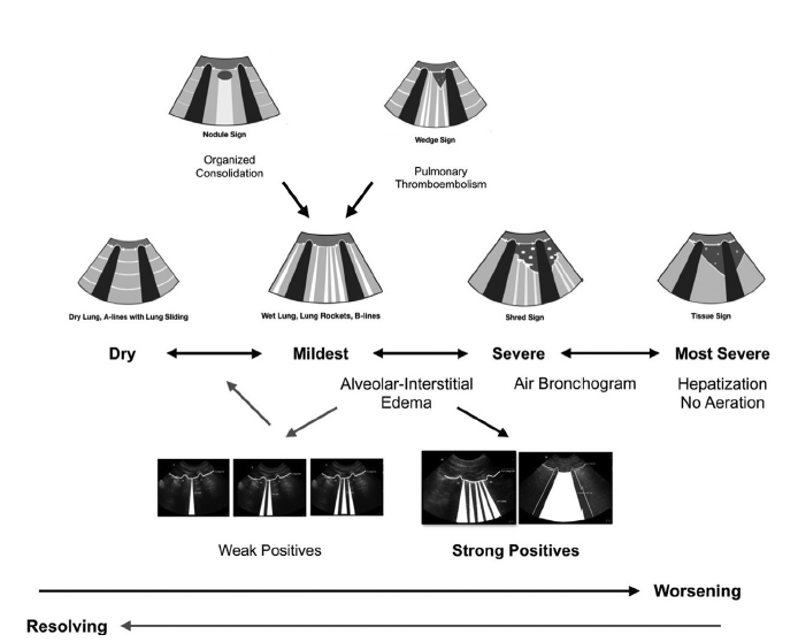 Fig 7. On the schematic Vet BLUE is shown as a monitoring tool from dry lung to wet lung to shred sign to tissue sign in the middle row. Wet lung can further be broken down into "weak" and "strong" B-line positives. In the upper row the nodule sign and wedge sign have been added. The arrows show directions for worsening and improvement. These images are used with permission from Dr. Greg Lisciandro, DVM, DABVP, DACVECC, Hill Country Veterinary Specialist, and Point-of-care Ultrasound Techniques for the Small Animal Practitioner, 2nd Edition, Wiley-Blackwell ©2021.

The take home message of this week’s blog is that Vet BLUE® is a rapid pulmonary screening test that may be more sensitive than lung auscultation and thoracic radiography for peripheral lung pathology (well documented in the human literature). I have found Vet BLUE® invaluable in my internal medicine practice. It is not uncommon to find evidence of lung pathology when imaging caudal lung fields through diaphragm at the diaphragmatico-hepatic view with cases presented for abdominal ultrasound. 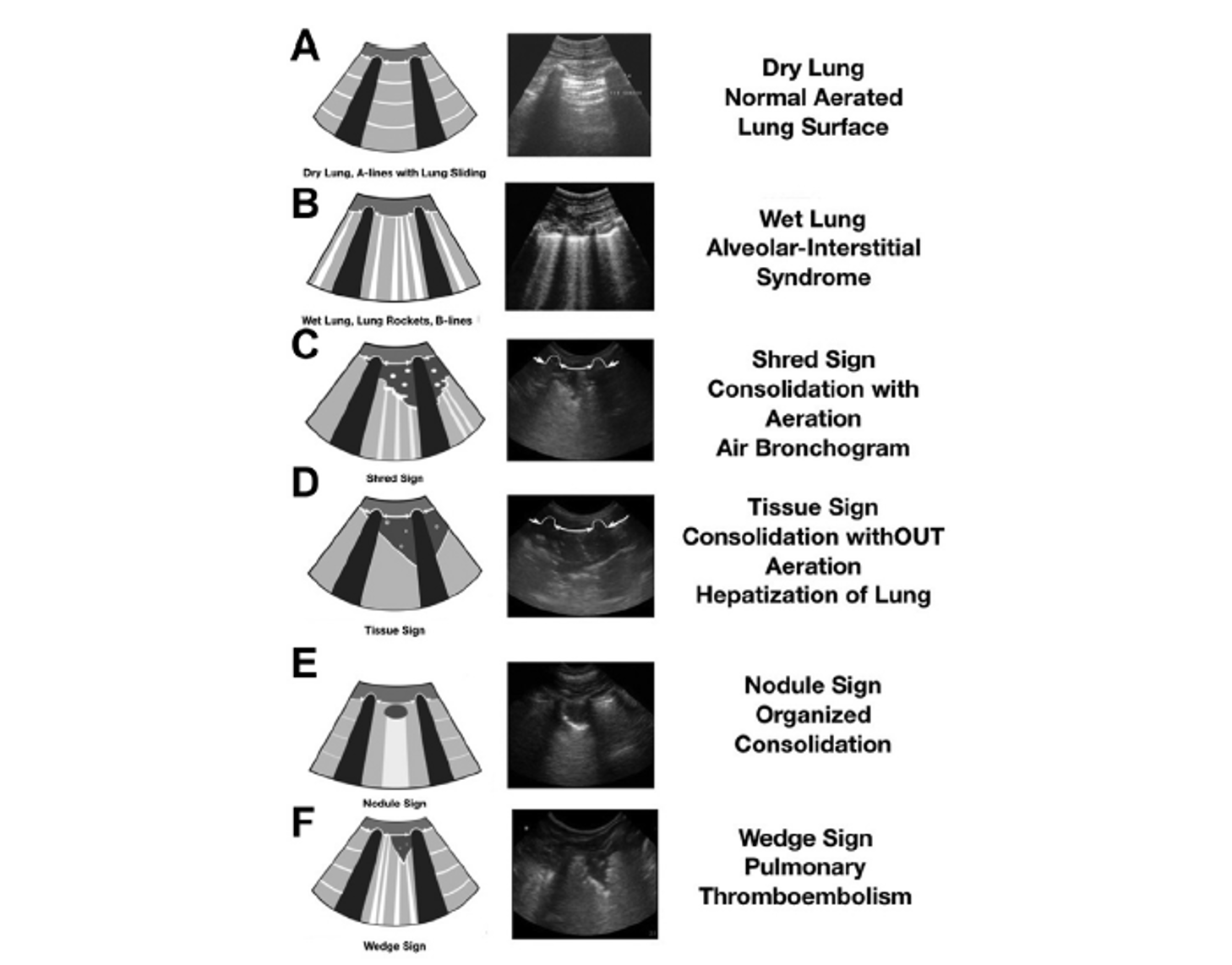 The bottom line in this case is that this patient would have been sent home without the correct diagnosis (or its suspicion) or with a course of ineffective antibiotics. It is possible (and likely) that the dog may not have returned until the disease was significantly more advanced and she was showing more significant respiratory signs including respiratory distress. By catching the pathology by Vet BLUE®, the diagnostic plan was streamlined, a diagnosis was made after this first visit without delay with an improved chance for cure.

The use of Vet BLUE® has been invaluable in my internal medicine practice. In this case, Vet BLUE® helped the referring veterinarian capture the case when treatment would be more effective rather than waiting until the patient presented with advanced disease, i.e., snowstorm lungs, and in respiratory distress.