In this blog, we will discuss using ultrasound of the liver to evaluate for diffuse hepatic parenchymal changes. The goals of using ultrasound examination for evaluation of the liver include recognizing focal and multifocal mass lesions and evaluating diffuse parenchymal changes. Evaluation for hepatic venous congestion can also be accomplished. The ultrasound examination can help guide clinical decisions by providing initial information that may not be evident without the use of ultrasound.

It is especially important to note that an unremarkable exam does not rule out the possibility of significant hepatic dysfunction and disease. Liver biopsy is needed to assess for architectural changes when there is evidence of hepatic dysfunction in the face of a normal ultrasound exam or one with diffuse mild to moderate changes in echogenicity.

Indications for Ultrasound Evaluation of the Liver and Gallbladder: 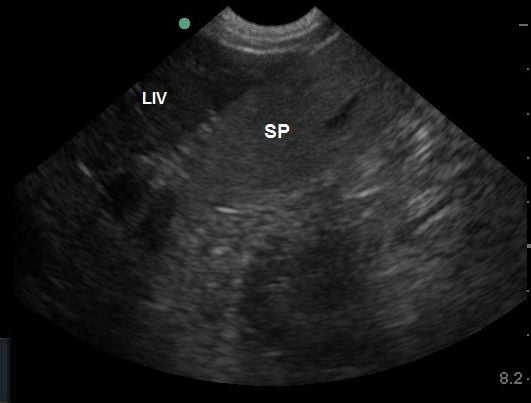 Figure 1 - Liver (LIV) is normally hypoechoic (darker) when compared to spleen (SP) as shown in the image.

Diffuse hypoechogenicity (parenchyma is relatively darker than normal) is generally noted when the hepatic parenchyma is significantly hypoechoic to right renal cortex. In addition, the portal veins appear more prominent due to the contrast between the hyperechoic walls of the veins and the hypoechoic parenchyma. This change can occur with diffuse inflammatory diseases such as cholangiohepatitis and diffuse infiltrative diseases such as lymphosarcoma (lymphosarcoma can also be seen with diffuse hyperechoic changes or normal echogenicity). Passive congestion can also result in mild to moderate hypoechogenicity.

Diffuse hyperechogenicity (liver is relatively brighter than normal) is can be seen with fatty infiltration (hepatic lipidosis in cats), steroid hepatopathy, other metabolic hepatopathies (diabetes mellitus), chronic hepatitis and cirrhosis. Infiltrative disease such as lymphosarcoma can also produce diffuse hyperechoic changes. In cats with hepatic lipidosis, liver is usually hyperechoic to falciform fat although this change can also occur in obese cats as an incidental finding. In cats with lipidosis, steroid hepatopathy and infiltrative diseases, the liver is usually larger than normal. In animals with chronic hepatopathies, the liver is generally expected to be smaller than normal (however, evaluation of hepatic size can be subjective).

Often, one encounters diffuse changes that are of mixed echogenicity.  This can be due to diffuse infiltrative disease (neoplasia, fungal infection), inflammatory disease or concurrent disorders (hepatic lipidosis and cholangiohepatitis in cats).

Other conditions may also have normal echogenicity and biopsy should be considered in the face of a normal ultrasonographic appearance if clinical and biochemical parameters support primary liver disease.

It is important to remember that animals may have severe hepatic dysfunction and normal ultrasound findings. Therefore, additional assessment is always indicated when liver disease is suspected and the ultrasound findings are unremarkable for liver changes. This may include pre- and post-prandial bile acid levels and ultimately liver biopsy.