A 8 year old F/S Cocker Spaniel presented for a 5 day history of vomiting, diarrhea and inappetance. She had been seen 2 days earlier and treated empirically for non-specific gastroenteritis with Cerenia and bland diet. On presentation, she had a fever of 104.2 and was tense but not overtly painful on abdominal palpation. CBC showed mild anemia (HCT 32%) and thrombocytopenia (52,000). Chemistry profile revealed elevation of ALT (235 U/L), ALP (982 U/L), GGT (24 U/L) and total bilirubin (1.2 mg/dl). cPL was normal. Abdominal radiographs showed splenomegaly and loss of serosal detail in the cranial abdomen. She was admitted to the hospital for supportive care. During hospitalization, she became hypoglycemic (blood glucose 52 mg/dl) but she responded to administration of intravenous dextrose. A complete abdominal ultrasound was requested.

A complete abdominal ultrasound was performed. An abdominal FAST was performed prior to the complete examination. Abdominal FAST showed the presence of echogenic fluid in the abdomen (abdominal fluid score 3/4). In addition, there was evidence of lung rockets (consistent with interstitial lung fluid) in the caudal lung lobes that was noted at the DH site through the diaphragm.

There was a large volume of peritoneal effusion noted. The effusion was highly echogenic which is consistent with cellularity. The duodenum was corrugated and thickened (see image below). The mesenteric and omental fat was hyperechoic and irregular which was consistent with reactive fat suggesting peritonitis. Overt pancreatitis was not noted.

Fig. 1: The free fluid is hyperechoic (represented by the arrows) to the adjacent liver. Echogenic fluid is consistent with cellularity. Generally, free fluid is anechoic or black in appearance. However, in this case, the fluid is highly echogenic indicating cellularity. The fluid is hyperechoic (or brighter than) to the liver and may be difficult to identify as free fluid to the novice ultrasonographer. The fluid is seen as the brighter bands indicated by the white arrows. Abdominocentesis was performed. The fluid was grossly hemorrhagic and cloudy in nature and the cellular elements of the fluid readily sedimented. Microscopic evaluation revealed a large population of neutrophils (bands and degenerate neutrophils) with a smaller population of lymphocytes and macrophages. In addition, numerous rod shaped bacteria were seen in association with clusters of neutrophils with occasional intracellular bacteria within neutrophils and macrophages. The findings were consistent with septic peritonitis. 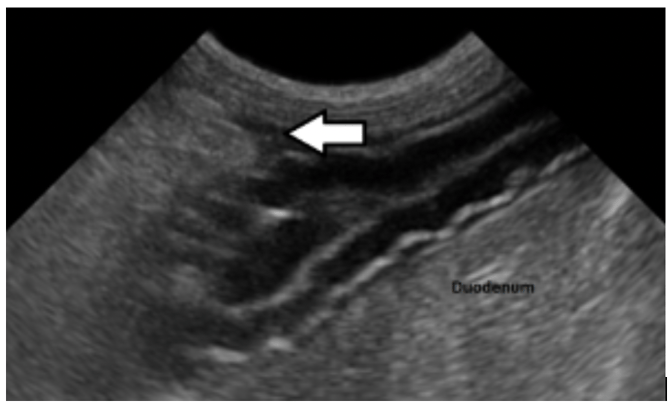 Fig. 2: This image shows a corrugated thickened duodenum with adjacent pocket of free fluid. The findings are consistent with focal enteritis. There are several interesting things to discuss in this case. With regards to the peritoneal effusion, the effusion was highly echogenic. In general, free fluid is anechoic or black in nature but in the case of cellular fluid, it can occasionally be so echogenic that it can be difficult to see for the untrained sonographer. Septic fluid is not always as echogenic as noted in this case and may appear anechoic or have variable degrees of echogenicity. Although the definitive cause of the peritonitis could not be definitively determined based on the ultrasound alone, the finding of a focal segment of duodenum with changes consistent with focal enteritis in addition to free fluid and hyperechoic fat adjacent to the affected segment may be suggestive that the cause is related to a perforation in that segment. Regardless, the finding of free abdominal fluid containing intracellular bacteria is indication for abdominal exploratory. In this case, surgery revealed a small perforation in the proximal duodenum.

Ultrasound was vital to the diagnosis in this case and I would suggest that ultrasound should have been performed sooner. In a patient with fever and elevated liver enzymes, ultrasound should be considered a first line diagnostic test and will expedite diagnosis and management in critical patients.It is important to note that septic peritonitis cannot be diagnosed on the basis of ultrasound alone. Cytological evaluation of the abdominal fluid is necessary for definitive diagnosis. I recommend that in-house evaluation of peritoneal effusion be performed in all cases as septic abdomen requires emergent care and you may not have time to wait for cytology results.

When submitting ultrasounds to specialists for interpretation at Oncura Partners, it is very helpful to include in your history the appearance and character of the peritoneal effusion. Do not wait to perform abdominocentesis until the consultation report is back – it is often vital to have this information at initial evaluation.